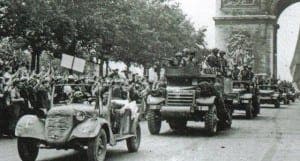 HE’S the Spanish war hero known as the liberator of Paris.

But Lieutenant Amado Granell was airbrushed from history after leading the first column of liberating tanks, manned by exiled Spanish Republicans, into the French capital in 1944.

Now 72 years on, France is publishing his first biography, Amado Granell, the Liberator of Paris by historian Cyril Garcia.

“We are proud to have fought for France. We want to be dignified soldiers of France, but without renouncing our Spanish nationality,” Granell famously declared.

Despite this, his name was erased from the photograph caption on the front page of Liberacion, the French newspaper, the day after he led his soldiers into Paris.

In one famous speech, Garcia details how Granell stood on the beach at Normandy and vowed to stay in the war until he had washed his hands in the Rhine.

He was to win France’s Legion of Honour and play an important role in Spain’s transition to democracy.

“Granell is a central man in the history of contemporary Europe,” writes Garcia.