THERE is nothing better than been surrounded by nature. In the dusty, dog-poo filled streets of Jerez, having a chance to get away from it all seems like a godsend.

I found mine through volunteering with the zoo. This weekend they took a group out to the marshes, aiming to teach them about the Osprey, Pandion haliaetus. We were tasked with constructing nesting sites for this restless bird.

I was collected at the reasonable time of 9am by Iñigo, the project organiser, and his young son. As we headed toward the marshes, he told me all about the species we were striving to influence, the Águila pescadora (Spanish for Osprey).

“It was extinct in Europe” he told me, “we want to help it and get them to stay in the Cádiz marshes.”

The species is a bit of a marauder. Osprey sightings are increasingly common, but getting them to stay and breed here is another matter. Normally, they continue onwards to England. I can’t think why – perhaps they prefer rain. By building nesting sites for them, the hope is that they will start settling down and having a family in Cádiz, instead of using Spain as a bird petrol garage.

“Look flamencos!” I look out the window, expecting to see someone twirling in the self-exerting form of the flamenco dance. Instead, I see flamingoes. Perplexed, I asked Iñigo where the dancers were. He told me that there are none, flamenco means flamingo in Spanish.

Despite this bird sharing a name with a famous dance form, I was assured that there is no link between the two.

Either way, the bird had the name first.

We met the group on the marshes edge. For anyone who hasn’t visited they are today a seemingly rather human managed affair. The land has been divided into sections by purpose built mud walls, some parts filled with light blue water, and some parts with up and coming plant life. 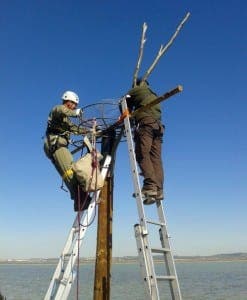 Driving onwards we arrived at the first man made nesting site. A tall stick with an uninviting metal stand stuck on top. I immediately understood the necessity of the project. Iñigo and a fellow zookeeper scaled the pole and waited for us to start to pass up pre-prepared nesting material.

Wire netting, fresh branches, old branches, and mud made their way to the top via a pulley system.

The crowd couldn’t do a lot more. People milled around and looked out over the marshes, enjoying the location. This is probably not a good trip to bring your restless family on. Binoculars were peered through, birds observed, a sudden shout, ‘there it is!’ We had spotted our first fishing eagle.

That’s a great thing to see as usually on these sorts of projects you build the nesting site having never seen the animal. Normally, you’re left with the vague hope that perhaps at least one is in the area.

As we carried on to the other sites, people slowly began to drip away by either cause of boredom or a demanding other half at home.

All in all for me it was a great way to spend a day and get to grips with the marshes, although I can see how this may not suit the more restless. You have the chance to spot the unique wildlife, and get a feel for a landscape completely unlike anything at home. The Andalucian sun is a special extra. For me, it was certainly something worth doing.

You can find projects like this to do during your time in Jerez by enquiring at the zoo. Iñigo is more than happy to take on any volunteers no matter where you’re from or what you do.

To really get a flavour for the local wildlife, go with the locals.