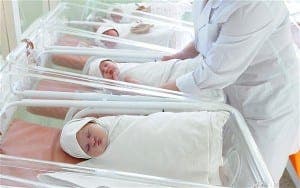 A WOMAN has been arrested after trying to steal five babies from two different hospitals.

Disguised as a nurse, the 21-year-old Spaniard was arrested at a Valencian hospital after she was stopped by the father of a newborn she had attempted to snatch.

Earlier in the day she had tried to take two other babies from a medical centre in Cartagena, some 170 miles away.

Police then discovered that she carried out three more failed kidnappings at Valencia’s La Fe hospital before being stopped.

The father – a doctor – who stopped her became suspicious after the ‘nurse’ claimed she needed to conduct a second heel prick test on the baby, just hours after birth.

After being rumbled she fled into the toilets and attempted to hide her nurse’s uniform.

Specialist officers are now trying to establish if she acted alone or with the help of accomplices.

“The incident occurred on Sunday evening when a woman dressed in a white gown entered a hospital room in Valencia saying she needed to perform tests on the child,” a police spokesman said.

“She took the child from a relative’s arms but its father became suspicious and started to ask her about the supposed test, receiving incoherent answers in return.

“He snatched his child from her arms and the woman fled the room.”

Security at both hospitals has been increased following the scare.