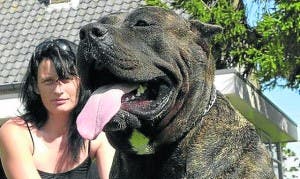 AN AWOL estate agent wanted for stealing a million euros and a hit and run incident has been tracked down to the Netherlands.

Dutch agent Annika Elena van der Pluijm, AKA Ana Sanchez – who also faked her death – has moved to the province of Drenthe, it can be revealed.

Shipping documents obtained by the Olive Press show that she and her husband Thomas van der Pluijm are now hiding out in Schoonebeek.

Papers reveal they moved their 15 Presa Canario dogs to a three-bedroom house in the town after her agency shut up in January.

The 37-year-old has now been arrested by police and could be extradited back to Spain to face charges, claimed sources in the town.

According to four Dutch neighbours, she has also been grilled over a similar property scam in Holland.

One told the Olive Press: “Ana is wanted here for the same sort of scam.

“Police arrested her just months after her return.

“She has been up to this sort of thing her whole life and still can’t see what she has done wrong.”

The Dutch realtor and her German husband disappeared from their home in Almeria in January, fleeing with up to a million euros of deposits taken through her agency Inmobiliaria Partaloa, based in Almanzora. 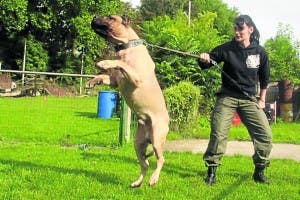 The victims, mostly Dutch and British expats, have since set up a Facebook page, ‘Catch these Scammers’, to track her down.

They claim police also want to talk to her over a hit-and-run incident which left a British man with ‘life-changing injuries’ last October.

A woman matching her description fled the scene after running over a group of cyclists near Cantoria, in Almeria.

Last month the Olive Press revealed that Van der Pluijm staged her own death in 2014 to escape a string of debts incurred through a dog breeding company Maricopa Presa.

So far ‘at least six’ official denuncias have been filed with police in Spain.

A spokesman for Dutch police refused to confirm or deny she had been arrested, claiming ‘due to privacy laws’ they cannot comment.

The power of the press!: Expat dogs in Granada rehomed after Olive Press story