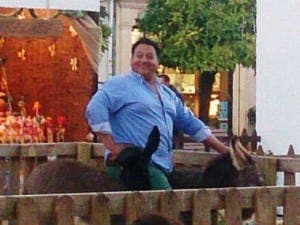 AN obese man accused of squashing a donkey to death in a Christmas nativity display will face no criminal charges.

A judge has thrown out the case at a preliminary trial, ruling that there is ‘no evidence of a criminal offence’.

Estimated to weigh 23 stone, the man posed grinning on a five-month-old donkey in a nativity display in Lucena, Cordoba, in December 2014. Just two days later, the donkey could not walk and had to be put down by a vet.

However, the judge ruled that the facts were not concrete enough to proceed with the case, claiming that the vet’s report was ‘inconclusive’.

“No aggressive action has been credited to the accused,” the judge said. “Even if aggressive conduct was proved, it is not clear what the direct cause of the animal’s death was, and it is therefore not possible to establish the cause-effect nexus needed so that the facts are prosecuted as a criminal offense.”

The Refugio del Burrito, based in Malaga, had filed a private case against the 38-year-old Spaniard in the hope of reaching a criminal conviction.

A spokesman for the refugio confirmed that they will be lodging an appeal against the decision.