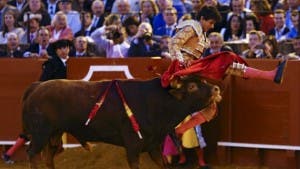 A MATADOR got a nasty surprise during Sevilla’s April Fair when a bull gored him in the backside.

Performing in front of the former king must be an uplifting experience for most bullfighters, but for Peruvian Andres Roca Rey it was for all the wrong reasons, as he was lifted into the air and shook by the bulls horn.

Crowds at the La Maestranza gasped while matadors rushed to his aid as blood poured down his leg.

The matador incredibly avoided serious injury despite being attacked by the angry 530kg bull.

He still managed a victory lap, which received a thundering applause from the crowd.