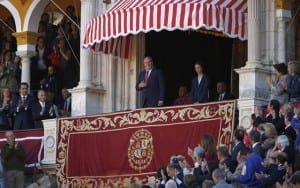 A TRIP to the bullring was a perhaps predictable way for Spain’s former king to celebrate his first trip to Sevilla in eight years.

Juan Carlos, his daughter Infanta Elena and his granddaughter Victoria Federica presided over events from the royal gallery in his first trip to the iconic Maestranza bullring since 2008.

The king – who was visiting for the city’s annual Feria de Abril – inaugurated a statue of his mother on the Paseo de Colon.