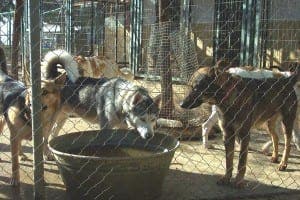 The animal sanctuary had been under fire after allegations of dog trafficking and animal cruelty led to the arrests of four of its staff.

Secretary Jan Weima was astonished by how many came to show their support, adding that the accusations were baseless.

He said: “The accusations are unfair and we ask people not to judge us before anything is resolved. This has been an injustice, revenge for some hatred and it cannot end like this.”

A statement and video released by the Guardia Civil that morning had also purported to show a freezer containing animals that had been killed illegally.

It said: “Triple A has a freezer in its facilities where the dead animals are deposited by Marbella Town Hall sanidad services.

“Therefore the images shown do not correspond to dead or slaughtered animals on the premises.

Of those shown in these images, among which are a goat and a seagull, only four dogs and a cat died in the facilities since February 26, the day of the previous collection by authorised company in charge of transporting animal carcasses and subsequent incineration.

“Of those five animals only one, a puppy born with a malformation that prevented him from breathing, had to be put down. This was carried out by a veterinarian  after extensive several diagnostic tests, including X-rays.”