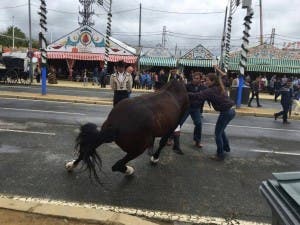 ANIMAL rights group PACMA has shared photos of a collapsed horse from Sevilla’s April Fair in a bid to shine a light on ‘animal exploitation’.

According to witnesses, the horse was released from his cart after he began shaking at Sevilla’s annual Feria de Abril.

The tremors continued and he collapsed to the ground before nearby vets rushed to his aide.

“Maybe thanks to them the horse is alive today,” PACMA said on its Facebook post, “All riders say they love their horses, but when money calls the shots, the animals take second place, circuses, zoos, carriages, horse rentals, the meat industry.

“Animals are not here to be exploited, live and let live.” 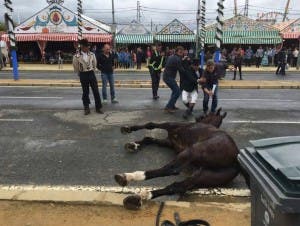 complaints, but the local authorities do little to tackle it.

The animal rights group had been at the fair to protest over its claims that millions of euros of taxpayers’ money are spent by the Andalucian government to subsidise bullfighting.

PACMA says dozens of bulls are killed during the city’s ‘April Fair’, while the government spends millions re-transmitting the fights on the public television channel and covering the financial losses of the organisers.