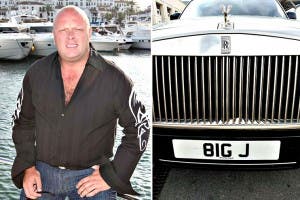 A BRITISH man who was recently released from jail was arrested in Marbella at the wheel of his dodgy Bentley.

Police stopped John Disley, 49, over suspicions of his number plates, which read 81G-J, or ‘Big J’.

Disley, AKA the ‘King of Marbella’, was released early from his four-and-a-half year sentence for an alleged bank fraud operation in the UK after it was quashed by the High Court.

The king was on his way back to Britain but was quickly de-throned when police impounded his Phantom, seized the plates and threw him in a cell.

The former bouncer was put before a judge who told him he faced a charge of falsification.

He was released on bail but remains at the centre of an ongoing court investigation.

Police are questioning how he was able to return to such a lavish lifestyle so soon.