A BRITISH expat who couldn’t read or write until he was 16 is about to publish his first novel.

Jack Jaeger will end the wait of a lifetime when his debut book The Stone Killers – Saga hits bookshops this month.

Jaeger´s novel follows an ´ordinary chap´ who, fresh out of the army, picks up an american hitchhiker.

But drama ensues when his new companion´s baggage holds the proceeds from a bank robbery, alongside three journals holding secret and devastating intel on top politicians.

Jack, 72, fell in love with storytelling growing up on a council estate in Hampshire in the UK. He would tell stories to get his younger siblings to sleep.

But at 14, unable to read or write, Jack joined the army, where he became an SAS officer for nine years.

The army taught him how to read and write and he passed the national tests.

Instead of pursuing a career in his passion of storytelling however, Jack, with a mortgage and two kids to look after, became a carpenter, a profession he stayed in until retirement. 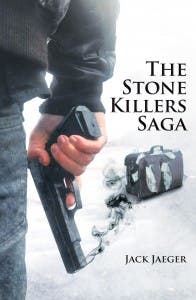 “It has been so frustrating,” Jack told the Olive Press, “It´s something that I´ve always wanted to do but couldn´t commit to, I have been writing this book for 30 years.”

Since retiring, Jack was able to complete his first novel in rapid time, and has already written another two.

“It´s amazing now that I have the time to write,” he said, “I just spend hours at a time on my laptop writing stories and doing what I love.”

Jack´s first novel is available from Amazon and all good bookshops from May 31.