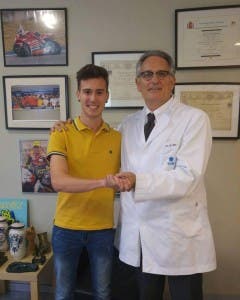 A YOUNG Andalucian climbing champion who almost lost his hand has thanked the Olive Press after generous readers stumped up money for a vital operation.

Cris Pineda Rodriguez, 18, was overjoyed that Costa del Sol residents – including many expats – helped to raise €9,000 for his surgery in Barcelona.

Suffering from the degenerative wrist condition Kienböck disease, Cris had feared he would never climb again.

But after five months of gruelling daily physiotherapy at an Estepona clinic, the Manilva champ has been given the all clear by doctors to resume his life’s passion.

“I’m so happy to be climbing again,” he told the Olive Press after returning to training last week.

“I want to thank all the Olive Press readers, and everyone around Andalucia who donated money,” he said.