WITH its prancing horses, Grand Prix racers and fiery flamenco, the city with the PX factor also delivers culture by the barrelful, writes Nick Nutter in an extract from his book,The Sherry Triangle.

Mention Jerez de la Frontera to most people and they will immediately think of sherry. Quite rightly, since Jerez is the world centre of the famous wine called sherry, and in 2013 Jerez de la Frontera was appointed the European Capital of Wine. A lesser-known achievement is the 2014 award of Motorbike Capital, the first in the world, gained for holding the Grand Prix motorcycle racing eventssince 1987 at the nearby Circuito de Jerez. This event occurs in late April or early May when tens of thousands of bikers from all over the world home in on the city. Jerez is also known as the city for flamenco and horses.

Economically the city is also on the front burner. Although there is no heavy industry and no civil service presence, Jerez is the centre of an agricultural industry that includes the cultivation of fruits, grain and vegetables and horse and cattle husbandry. Not forgetting those all-important products – wine, sherry and brandy. It has become the centre of transportation and communications for the province, surpassing even thecapital city of Cadiz in economic activity. Over recent years there have also been successful initiatives to increase the tourist trade to the city, based not least on its historical heritage that dates back to the Neolithic period.

So, what to expect from the city? Most people arrive by car, after all Jerez is billed as a transport hub. The hub is the ring road. To actually penetrate the heart of the city you must leave the security of that road and take to the unknown, naively following the signs for ‘centro de ciudad’ until you start to recognise corners, junctions, bodegas, even local men and women sitting in the sun outside their front doors, and realise that you are travelling in ever-decreasing circles. The vehicular signposting is atrocious. 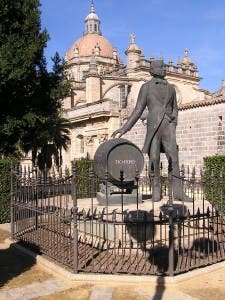 One of the best aids to navigation is the Gonzalez Byass, Tio Pepe weather vane, the largest in the world, towering over the Gonzalez Byass bodega. Failing that, I strongly recommend the sort of GPS that talks you through junctions and streets to your destination. Hopefully your destination will have a car park because Jerez is undoubtedly pedestrian-friendly with clear signs to attractions and landmarks, many pedestrian-only streets and a reasonably compact city centre. By foot is the only way to appreciate Jerez.

First impressions may be that there is a very ‘British’ feel to the place. I have been to Jerez a number of times and tried to analyse how they have achieved this. The British have, of course, been involved in Jerez for 300 years now, as financiers, industrialists and partners in the sherry industry. The many posters, billboards and name plates outside the bodegas, each the sizeof a small village with grand wrought iron, gilded gates, bear witness to that with names such as Sandeman, Harvey and Williams and Humbert … but there is more. Walking past a line of shops, a gents’ outfitters will catch the eye, not because they do not have such shops in Spain, but because the window is full of tweed and lounge suits with leather elbow patches, brown brogues, trilby hats and gentlemen’s scarves. Once you have seen such a shop you will notice that many of the men are indeed wearing that apparel – clearly a British influence at work here although I am not sure brown shoes go with dark blue suits, even if they do have elbow patches. If you happen to be in Jerez during a rainstorm, you will see what I can only describe as ‘the sprouting ofthe umbrellas’. They suddenly appear in everybody’s hands and form a jostling carapace over the footpath, just like Oxford Street on a wet Friday. Or perhaps the atmosphere is a direct result of all shopkeepers, assistants, bar proprietors and restaurant waiters immediately recognising you as British and addressing you in perfect English. They all have a certain cheerfulness about them that I can only describe as, well, British. 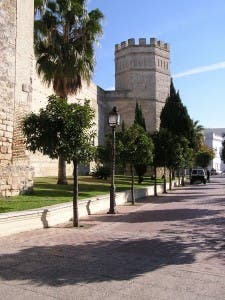 Which brings me to my next point. Jerez is a cheerful city and it is not wholly due to the amount of sherry produced and consumed. It is colourful with great patches of green areas studded with flower beds, hanging baskets but, most of all, those bodegas. Each one seems to have its own roundabout at the gate and each one seems to be in competition with the next to make its roundabout the most attractive. The walls surrounding the bodega are usually sparkling white, allowing occasional glimpses of the manicured gardens within. A lack of heavy industry means the air is clear, and that must help to keep the buildings within the town clean. It is a pleasure to wander the streets and plazas.

Whilst wandering, you will stumble across any number of cafes, restaurants and bars. It is in the latter that you should try the sherry. There are nine types produced within the Sherry Triangle, an area of land formed by a line between the towns of Jerez de la Frontera, El Puerto de Santa Maria and Sanlúcar de Barrameda and dozens of manufacturers and labels. They range from the driest fino sherry to the sweetest Jerez dulce so there is plenty of choice and many decisions to be made as to which you prefer.

In order to value the sherry-tasting experience, it is worth savouring the moment by first visiting one of the city’s many attractions. The 12th-century Alcazar is one of the last examples of Almohade architecture in Spain and contains an exquisite little mosque.

For horse admirers, a visit to the Royal Andalusian School of Equestrian Art is essen 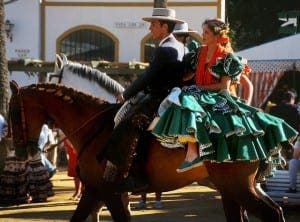 tial. This school is ranked with the Spanish Riding School of Vienna and it is here that Andalusian horses are taught to ‘dance’, a carefully choreographed performance from horse and rider. Alongside the school premises is the Carriage Museum, a collection of horse-drawn road carriages ranging from sporty little numbers to elaborate gilded coaches.

If you have time, then a visit to the clock museum is worthwhile. Its 302 clocks, mainly British and French and dating back hundreds of years, are dedicatedly wound periodically and maintained to keep perfect time … well almost. On the hour, all the British chiming clocks chime and the time is set so that as one finishes, another begins; and at the half hour, the French chiming clocks strike up. There is a definite bass note to the former and a twinkling light-hearted treble from the latter.

Time now, I think, for that sherry.

‘The Sherry Triangle’ is a book written by Nick Nutter.

It is available now on Amazon and Kindle.