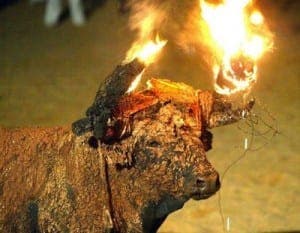 The longtime tradition adorns bulls’ horns with flaming balls of wax before sending them running through neighbourhood streets.

The ban was approved on Friday by mayor Joan Ribo, who cited cruelty to animals.

The town hall has also cut funding for bull runs and bullfighting schools, bringing it a step closer to a full out ban on bullfighting.

Popular Party representatives labelled the ban a ‘violation of the city’s heritage’.