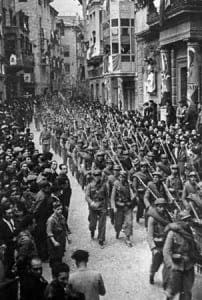 A CONTROVERSIAL campaign has been launched to build the first Spanish Civil War museum.

The unprecedented initiative, led by a host of internationally respected historians, is likely to ruffle feathers in Spain, where ‘a pact of forgetting’ has been in place since the war’s end in 1939.

The museum, planned for Barcelona, would be the first in the country to document the war, which killed 500,000 Spaniards and left a bitter legacy.

The war saw nationalist forces propped up by Hitler and Mussolini overthrow the democratically elected government in 1936.  A dictatorship, led by Franco, remained until 1975.

Proponents of the plan, who have received support from the Orwell Society in Britain, insist it would be balanced and objective.