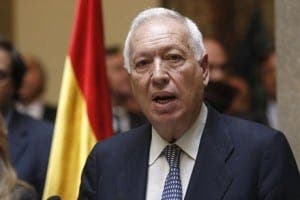 Margallo told a Spanish news agency that Spain and the UK are allies and partners, but in spite of that ‘have profound differences’ over Gibraltar.

He reiterated Spain’s views on Gibraltar and that the UK must engage in ‘bilateral sovereignty talks’ with Spain.

The British government notified Madrid of the PM’s plans to visit Gibraltar in order to rally Gibraltarians to vote Remain in next week’s EU referendum.

Cameron’s brief  trip is the first visit from a serving British prime minister in 47 years after Harold Wilson visited for talks in 1968.