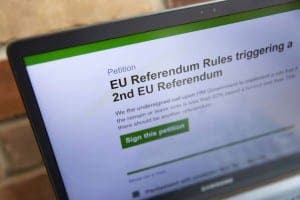 LEADING British businessman Sir Richard Branson has called on the UK Parliament take a second look at the EU referendum after a petition online has garnered almost four million signatures.

The petition calls for a new rule to be implemented stating that polls with a majority under 60% and a turnout of less than 75% must be re-started.

Branson said in his blog: “The decision over the UK’s future was based on false promises that pushed a minority of the UK’s total voting population (17 million out of 46 million) to vote the way it did.
“Based on the misrepresentation made by the Leave campaign, Parliament needs to take the petition of more than three million people to call for a new referendum seriously. The alternative is to watch a rapid decline of Britain’s health and wellbeing.”

The Virgin Group founder has implored people to add their signatures to the petition, which has since gathered 3.6 million signatories.

The government is duty-bound to address any petition that collects more than 100,000 votes, and it will set a date to discuss it in three days time.

Meanwhile, an investigation into the viral petition has been launched following allegations that some of the names added could be fraudulent.

It is thought people from abroad have been adding their signatures and that some are signing it more than once.

Users online have pointed out that many expats live abroad and therefore have a right to sign it.

However some 77,000 signatures were removed over the weekend.

“People adding fraudulent signatures to this petition should know that they undermine the cause they pretend to support,” said lawmaker Helen Jones, who chairs the House of Commons petitions committee looking into the claims.

The shock result has lead to a shake up of the UK political scene, with both of its major parties facing leadership battles.