A TOTAL of four people have been injured on the first morning of Pamplona’s San Fermin festival.

Thousands of thrill seekers raced along with six bulls and down a narrow course to the Pamplona bull ring. 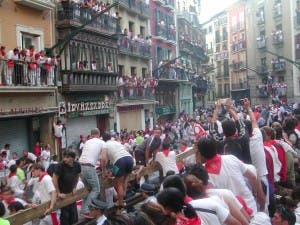 Four people suffered minor injured in falls but nobody was gored on the first bull run of the San Fermin festival.

The four people injured were Spaniards who sustained arm and head injuries.

Dozens of people are wounded from falls each year during the runs.

Last year ten people were gored during the famous festival, which is Pamplona’s biggest tourist event.