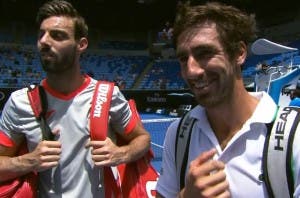 The 30-year-old Spaniard and his Uruguayan doubles partner Pablo Cuevas were looking for a place in the quarter finals, playing against Britain’s Jonathan Marray and his Canadian partner Adil Shamasdin.

But they soon lost their cool after some questionable line calls were followed by the French umpire, Aurelie Tourte, refusing to allow Cuevas a toilet break during the final set.

Tourte alleges Cuevas then threatened to pee into an empty ball can under the cover of a towel, earning the pair a code violation.

Royally peed off, the Uruguayan smashed the ball out of court, earning a second code violation and triggering a points penalty in the business end of the deciding set.

The penalty left Marray and Shamasdin with triple match-point.

They may now face fines for their behaviour.

“I don’t think it’s ever nice to see,” said Marray afterwards, “You have to respect the officials regardless of whatever happened in the match.”

Shamasdin admitted that umpire Tourte could have handled the situation better.

“I don’t think the chair umpire really had the match controlled,” he said, “she made a few mistakes early on at both ends. We were all on her and she was definitely flustered. I don’t think she handled it correctly.”