IT began in Spanish-held Morocco on 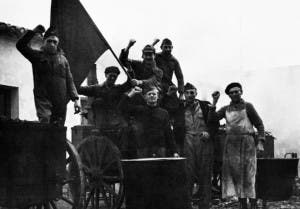 July 18 1936 with a military uprising led by General Francisco Franco against the Republican government of Manuel Azaña.

Defying their own governments’ non-interventionist policy to join up and follow their passion, some of these non-native untrained volunteers risked not only their lives but their citizenship.

Known as the International brigades, they came from all over – from the United States, Poland, Sweden, Yugoslavia, Cuba, England, Peru, France – even from Germany and Italy, countries supporting the ‘enemy’: 40,000 volunteers in all, including a bunch of raw Americans who had never before held a gun in their hand, most of them under 20.

Republican ranks had hitherto been comprised of many workers and peasants with the support of the Spanish government, Socialists, and Communists.

Rebellious factions of the army, landowners, middle classes, and the Catholic Church supported the Nationalist right.

The Lincoln Brigade was the first American military unit to be fully integrated but this ‘secret army’ was a covert affair.

The United States had adopted a policy of neutrality. Afraid of alienating isolationist voters, afraid that the liberal government in Spain might turn Communist, afraid of antagonizing Hitler, America refused to sell arms to a legally-elected government for the first time in history – a policy that implicitly favoured Franco.

The Republicans could only purchase arms from the Soviet Union and even those efforts were hampered by a British and French naval embargo.

Recruitment for the Lincoln Brigade was organised by America’s Communist party through word of mouth and advertisements in newspapers pretending to seek workers for Spain.

But many of the volunteers were simply working men for whom the war offered idealistic adventure and escape from post-Depression unemployment.

Their deployment was arranged secretly, as travel to Spain was banned. Pretending to be tourists or students, they crossed the Atlantic under the very real threat of losing their US citizenship, had their true mission been discovered.

They were not alone although few volunteers were as inexperienced as the Americans, who were completely unprepared for combat against highly-trained soldiers.

And yet for young African-American soldiers in particular, it was their finest hour.

With the US civil rights movement still 30 years away, African Americans like Tom Page saw war as an escape from racism and an opportunity to live out his political ideals as an equal.

Page poignantly recalls that time in the documentary: The Good Fight: The Abraham Lincoln Brigade in the Spanish Civil War.

His views are echoed by African American nurse Salaria Kea O’Reilly, “I had no problems about being black. I forgot I was black.”

The war they entered was unlike any the world had seen before. For the first time in history, civilian populations were systematically bombed by the German Condor Legion. Picasso portrayed the full horror in his painting, Guernica.

After the fall of Malaga to Nationalist forces, over 100,000 civilians were forced to make a two-week mass exodus along the coast road to Almeria while under attack from air and sea in what became known as the ‘Caravan of the Dead’.

The Lincoln Brigade first saw action at Jarama, in February 1937, defending Madrid. On the worst day of the battle, 127 died and 200 were wounded.

The army of civilians and international brigades were able to hold the city against the Nationalist forces but suffered further heavy casualties as the fighting progressed.

And by the end of 1937, with no planes and a shortage of weapons, ammo and medical supplies, Republican defeat seemed inevitable.

The United States, France and England still refused to help, even as Hitler invaded Austria.

Republicans rallied their forces for a last push in 1938 but were unable to turn the tide of the war.

Fighting continued for five more months but for the Americans, with 70% of volunteers dead or missing, the war was over.

Ultimately, the Republicans withdrew the international brigades in the hope that world pressure would force Franco to withdraw his aid as well.

The Lincoln Brigade left Spain knowing there was no victory, only imminent defeat.

“The pain of that loss never quite leaves you. It comes to me in various ways as the days go by,” explains Lincoln Brigade veteran Abe Osheroff.

However these valiant volunteers went on to win admiration and a place in posterity from unexpected quarters. Ernest Hemingway wrote For Whom the Bell Tolls about an American volunteer in the Spanish Civil War, and George Orwell’s Homage to Catalonia was similarly inspired, largely by British volunteers.

World War II broke out in Europe six months after the fall of Republican Spain, when most of these able-bodied troops joined the United States army to fight fascism a second time.