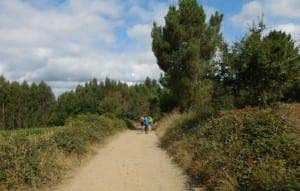 A WELSH teenager has died during a 560-mile pilgrimage in Spain.

Michael Cura, 16, from Swansea, was coming to the end of a cycling pilgrimage with school friends when he collapsed and died.

Travelling 50-60 miles a day, some 21 pupils and eight members of staff had been heading for Santiago de Compostela in north-west Spain via the centuries-old pilgrims route the Camino de Santiago.

The cause of death is not yet known but Michael, an altar boy at the Sacred Heart church in Swansea, was not involved in an accident.

His school says it is devastated by the news.

Fr Jason Jones said: “The parish community of the Sacred Heart at Morriston are deeply saddened and shocked by the sudden death of Michael.

“The family and friends of Michael attended a special mass this morning before jetting off from Heathrow.

“He was a fun-loving, caring and committed altar boy and a helper for the disabled youth. A caring, greatly loved and popular young man who will be very missed.

“It is a very emotional time for the family and for the whole community.”

The pupils and staff will return without finishing the trip while Michael’s parents are being flown out to Spain, a Swansea council spokesperson said.