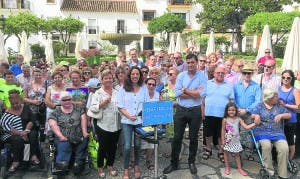 CONCERNED Estepona residents are battling for the Junta to build a new hospital.

A pressure group – Plataforma Ciudadana Pro Hospital de Estepona – is demanding the Junta completes the hospital after it earmarked €16.9 million for the project in 2008.

Building work was inexplicably shelved in 2010.

“This is agonising for families of people who urgently need operations. It is unacceptable that the Junta hasn’t yet built this hospital.”