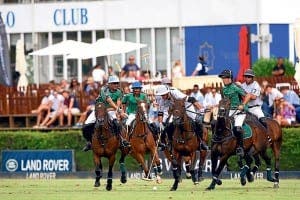 THE 45th INDI International Polo Tournament has begun at the Santa Maria Polo Club in Sotogrande, running from July 27 to August 28.

‘24 teams representing 18 nationalities, more than 830 horses and 98 players’ will participate in this year’s tourney, the club said.

Four of the tournament’s championship cups are classified as World Tour cups, signifying the event’s prestige.

Equally presitgous is the host club.

The club’s PR manager Pilar de la Puente told the Olive Press: “Sotogrande is the known as ‘the cathedral of European polo.’ It’s the best club in Europe and the ranked third in the world.”

Though the tournament is unsurprisingly posh, with such high-end sponsors as Maserati, Cartier, it does have one bit of democratic flare.

For every match except the final, attendance is open and free to the public, with crowds usually growing above 50,000. And the finals are only a tenner.