SKIES will be ablaze with shooting stars on August 11th and 12th thanks to the Perseid meteor shower. 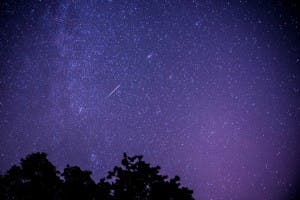 NASA meteor expert Bill Cooke said: “This year, instead of seeing about 80 Perseids per hour, the rate could top 150 and even approach 200 meteors per hour,” meaning that there is a better chance of seeing a meteorite.

The best time for viewing is from 11pm to 4:30am at a location like the beach or the mountains, far away from light pollution.

Once you have settled in at your observation spot, face half-way up toward the northeastern portion of the sky.

It is not recommended to look directly up at the sky or at the constellation since you are more likely to see a trail looking slightly away from that point.

Since the shooting stars are visible to the naked eye, there is no need for binoculars or a telescope which can actually limit your field of vision.

Allow yourself to adjust to the darkness and patiently wait for the flurry of meteor activity that is bound to come.

Shooting stars or falling stars are streaks of light caused by tiny bits of dust and rock called meteoroids falling into the Earth’s atmosphere and burning up.

The Perseid occurs when Earth crosses the orbital path of the Comet Swift-Tuttle.

In Spain the phenomenon is known as Lágrimas de San Lorenzo (tears of St. Lorenzo) because the best viewing nights often fall around the August 10th feast day of the Spanish saint.