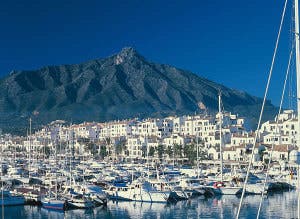 A GROUP of French men are being probed by Spanish police after allegedly assaulting British women holidaymakers in Puerto Banus.

A 19-year-old woman from Farnborough received a broken nose from a punch in the face, while a 20-year-old female from Essex was taken to the Costa del Sol hopsital semi-conscious with arm and head injuries.

Witnesses say the men launched the attack after one of the group attempted to ‘touch up’ the 19-year-old at around 6am on Tuesday.

A friend of the girls said the violence erupted from a verbal row.

One member of the French group, who were all of Arab origin and are believed to be Muslim, was arrested for assault.

Three others were taken to the police station as part of the investigation.

Police are trying to identify additional members of the group who fled the scene.

Local police are  preparing a report for the Policia Nacional who will take over the investigation.