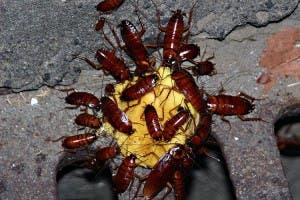 BELIEVE  it or not, cockroach milk could be the superfood of the future.

An international team of scientists have sequenced a protein crystal located in the midgut of the world’s most reviled bug that is four times as nutritious as cow’s milk.

Researchers believe it could prove vital in feeding the world’s growing population.

Unlike most cockroaches the Diploptera Punctate species, the only one to give birth to live young, pumps out a type of ‘milk’ containing protein crystals to feed its offspring.

But scientists won’t be hooking up millions of mother cockroaches to milking machines. They plan to replicate the crystals in the lab.

“The crystals are like a complete food, they have proteins, fats and sugars. If you look into the protein sequences, they have all the essential amino acids,” said Sanchari Banerjee, one of the team.

Another vital factor is that this dense source of calories and nutrients is time released.

As the protein in the milk is digested, the crystals release more protein at an equivalent rate, to continue the digestion.

“If you need food that is calorifically high, time released and complete, this is it,” said Subramanian Ramaswamy, who led the project.

It is hoped the superfood can help combat malnutrition in Third World countries and in times of food shortage.

Cockroach milk is the new superfood of the future

Spanish morcilla hailed as superfood alongside blueberries and kale