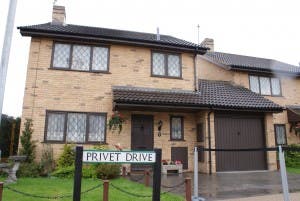 Based in Bracknell, near London, the property was chosen in 2001 to be the home of the Dursleys and was where a young Potter, played by Daniel Radcliffe, first lived in the cupboard under the stairs.

Super fans with a spare half a million euros can purchase the piece of cinematic and literary history for €554,000.

J K Rowling’s Harry Potter books topped the charts in Spain and across the world, as did the film adaptations.