Bullfighting is suffering a profound crisis of identity; so deep and so serious that the sport is in danger of disappearing in the next few years.

The cause will not be laws imposed by politicians who do not respect our freedom to enjoy what is part of the Spanish culture, but the uninterest of spectators. They are bored with bullfighting which lacks the excitement and passion of previous eras.

The bull, the great protagonist of the spectacle, is no longer a powerful animal – fierce, spirited and noble – but a caricature of itself, bred to be docile and domesticated.

The best-known matadors don’t exude the personality and elan of their forefathers and prefer to fight the least-challenging animals from commercial bull-breeding ranches. Instead of a spectacle, audiences are presented with a display that is anodyne and disappointing.

The case of José Tomás, a legendary matador, is a paradigm. Without doubt the leading matador of his generation, he prefers to stay away from the most important bullfighting festivals and instead is paid highly for fights that do not test his skills. The average price of tickets to a secondary bullring is about £60, very high for most Spaniards, particularly when they may find themselves on stone seats exposed to the sun, the cold or the rain. Little wonder that the public is turning its back.

The recent bullfighting festival in Bilbao, one of the most prestigious in the world, was largely deserted, and Plaza de Toros de Las Ventas in Madrid, the home of bullfighting with a capacity of 23,000, fills up only on the biggest occasions. The sign ‘No seats left’, often seen in the past, is a rarity today.

The most surprising and worrying thing about all this is that nothing is changing. No one takes the hint. It is clear that the best-known bullfighters are not interested, and prefer to win all their fights easily.

The companies that organise bullfights are failing, but take no steps to halt the decline. The fighting bull has disappeared, but they don’t care. 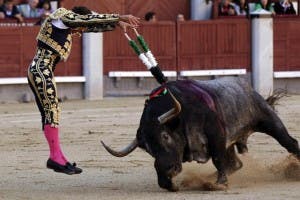 Why? Because bullfighting is run by a mafia, an organised group of all the people involved, from bullfighters, breeders and companies, who act without any scruples and any thought for the audiences.

It is a strong, closed mafia that prevents the necessary revolution and the emergence of modern forms of management and new matadors. So closed is the world that becoming an important new bullfighter is more difficult than becoming the next Pope.

Bullfighting is monopolised by a small group of matadors and four companies who decide which bulls are chosen to fight and what the audience will see. They abuse their position and offer the public a product for their benefit rather than that of the audience.

For these reasons, and because of pressure from animal rights groups and politicians, bullfighting will disappear sooner rather than later.

Soon it will be time for regrets, but few will probably remember the grave damage inflicted by the bullfighting mafia – the rancid, ultra-conservative, selfish group who share the crumbs of a business that they themselves are condemning to death.

This article first appeared in The Times.

THE FRENCH CONNECTION: Cocaine gang based in Marbella and Paris busted