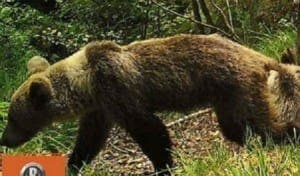 WILD bears in Spain are suffering from malnutrition after a very dry summer and poor fruit harvest.

Images captured in the Cantabrian mountains showed some bears were extremely thin and showing symptoms of cachexia, a wasting disease.

FAPAS – the Fund for the Protection of Wild Animals – said they are ‘extremely concerned’ by their condition.

“Climatic conditions has caused complications for the bears this year, altering the natural life cycles that are so important to the survival of the bears,” said a statement from FAPAS.

“A very dry summer has led to a poor and late harvest in fruits such as cherries and wild berries, which the bears rely on.”

The naturally shy creatures have now been forced to leave their isolated valleys where they usually thrive to forage in human-populated areas.

FAPAS said it is why there have been more reports of damaged bee hives, because the hungry bears are seeking out honey.

If they are not sufficiently fattened up before winter, when they hibernate, they may not survive.