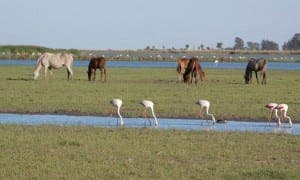 SPAIN could be the home of the first national park to be classed as ‘in danger’.

Doñana park in Sevilla has lost its natural water due to marsh drainage and intensive agriculture.

It leaves Spain until December 1 to declare the greenery as ‘off limits’.

The wetlands are home to around 2,000 different species of animals, including flamingoes and the  endangered Iberian lynx.

Around 80% of the water has been lost, with regulators UNESCO urging Spain to disclose it as a national problem.

The land, which stretches 540 square kilometres, usually receives its water from the Guadalquivir and Guadiamar rivers which are now in short supply.

Eva Hernandez, a spokeswoman for WWF said: “Doñana’s biodiversity has eroded over the last 40 years and we are reaching a point of no return,”

“We could do things to recover the park – and some things are being done – but the pressures on it from private and public companies are becoming unbearable. We must decide whether it is more important to consume all of Doñana’s resources or to preserve its biodiversity and services to the people.”