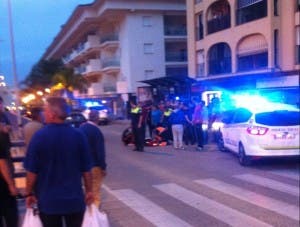 A YOUNG man is in recovery after being left on the road following a suspected hit-and-run on the Costa del Sol.

He suffered a broken nose, broken collar bone and ankle.

The man was wearing a grey hoodie and denim shorts and was left lying unconscious by a zebra crossing, outside a Supersol supermarket in Sabinillas last night.

The driver is said to have already been arrested by Guardia Civil.

Around 100 people watched as the man, believed to be in his late teens, was finally placed into an ambulance after a shocking 20 minute wait.

A queue of buses and cars were held up as six policeman desperately pleaded for the ambulance to arrive.

Dozens of kids cried as they watched him be placed in a neck brace before being taken away.