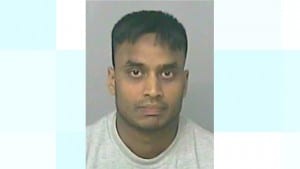 A CONVICTED rapist wanted in the UK has been arrested in Spain.

Most Wanted fugitive Mohammed Jahangir Alam has been picked up in the popular holiday destination of Tenerife, the Olive Press can reveal.

Snagged while eating at a restaurant in the Playa de las Americas resort yesterday afternoon, Alam has been among Britain’s most wanted for a year.

Arrested by plainclothes Guardia Civil, he is currently being prepared for extradition, according to sources close to the investigation.

Convicted for a rape in Cheltenham in March 2010, 33-year-old Alam was sentenced to 14 years in his absence.

Originally from Bangladesh, he moved to Bradford in 2007 before relocating to Cheltenham where he physically and sexually abused one victim.

A source told the Olive Press: “The arrest was carried out by Spanish police.

“It was a quick operation and Alam will now be taken to Madrid where he will be finger-printed and prepared for extradition tomorrow.”

Another source close to Spanish police said: “This man’s face has appeared on many occasions, but we never gave up trying to find him.

“This is excellent news.”

It is the second arrest this week as part of Operation Captura – a joint Spanish and UK police campaign.

Suspected paedophile Matthew Sammon was arrested on the popular Costa del Sol resort of Fuengirola on Thursday, after a stakeout by local expat paper the Olive Press.

Sammon has now been taken to Madrid where he will be extradited to the UK on charges relating to owning and distributing indecent images of children.

Lord Ashcroft KCMG, Founder and Chairman of Crimestoppers, said: “To have secured a second arrest in the space of a few days, following last week’s appeal and arrest of Matthew Sammon, is a tremendous result.

“I thank our partners, the National Crime Agency and Spanish Police, for their efforts, and would remind anyone that has information on the remaining 18 wanted individuals that Crimestoppers is an anonymous service for you to tell us where they are. So do the right thing, and let’s ensure we achieve more positive results.”