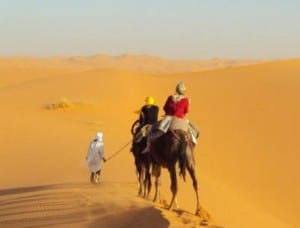 SOUTHERN Spain will turn into a desert by the end of the century if global warming is not dealt with, a new study suggests.

The study used historical data and computer models to predict the likely impact of climate change in the Mediterranean.

It based its research on the targets for limiting global warming that were agreed to by 195 countries during the Paris summit last year.

“The Paris Agreement says it’s necessary to limit global warming to 2 degrees Celsius (3.6 degrees Fahrenheit), if possible 1.5 degrees,” said Joel Guiot, a researcher at the National Center of Scientific Research in France who co-wrote the study.

“That doesn’t seem much to people, but we wanted to see what the difference would be on a sensitive region like the Mediterranean.”

The study suggest that even if global warming is limited to 2 degrees, deserts would expand in Spain, North Africa and the Near East, while vegetation in the Mediterranean would undergo a severe change from the coasts to the mountains.

The study did not factor in human activity in the Mediterranean, including intensive agriculture and tree clearance.

“If anything, human action will exacerbate what the study projects, and it could turn out to be too optimistic,” Guiot said.

The Paris climate agreement will come into force next week.