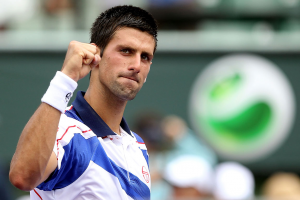 Imaz’s techniques include telling students to send ‘pleasant thoughts’ to a container of boiled rice as part of projects to better themselves.

The 42-year-old, whose Amor y Paz centre is in Marbella, is known for his unusual methods, which include long hugs for his students.

World number two Djokovic has raised eyebrows by bringing Imaz to the Paris Masters in place of Boris Becker, who has not been present at the tournament.

The Serbian player has grown closer to Imaz – who has been a member of his team for years – since his performance began to dip after claiming the French Open in May.

He soon crashed out of Wimbledon in the third round and failed to reach the US Open final.

Djokovic recently recharged in Marbella, near Imaz’s centre, following a shock defeat to Spain’s Roberto Bautista at the Shanghai Masters.

He combined training at the Puente Romano resort with yoga and strolls along the beach with his wife, son and parents.

The Serbian will be hoping to reclaim his number one spot from Briton Andy Murray at the ATP World Tour finals in London later this month.