THIS is going to be all about my next door neighbours who smell of wee wee. I really, really hope they never read this or hear about it, although I don’t suppose they will. They speak less English than I speak Spanish. 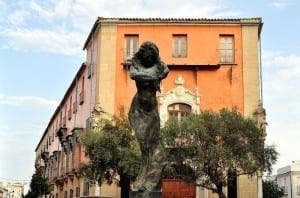 I’ve bought a tiny one-storey house in the beautiful, tranquil town of Jerez de la Frontera, the home of sherry and flamenco.

My plan was to knock it down and build a new, two-storey structure (you can read the background here). It took a year to draw the plans and get the various council approvals, then eight months to build it. I’m living in it now, although it’s still more like a squat than a showhome.

It’s at the back of a casa de vecinos –  an old terraced house divided into apartments. To reach my place you go in through the front door, along a narrow passageway, across a tiny courtyard, then along an even narrower passageway till you come to a steel gate with a lock. 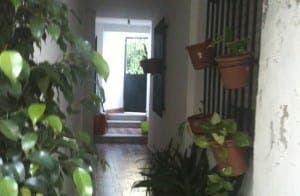 You unlock the gate and step into a big, sunny patio with the house at the end of it.

Right next to the gate there’s an apartment where an old couple live. When the weather’s fine, which it often is, they leave their door open and as you go past you’ll usually see them sitting there side by side, watching telly.

They’re a really sweet couple, especially the old lady, who always shouts a cheery buenos dias as you pass. They’ve been amazingly tolerant of the disruption: all the building materials – bricks, steel joists, a metal staircase, you name it – brought in along the passageway; all the remains of the demolished house carted out; a cement lorry parked in the street, completely blocking it for two days, while tons of concrete were pumped through; the entire tiled patio torn up and re-paved; new sewage pipes laid; noise, dust and chaos for months. 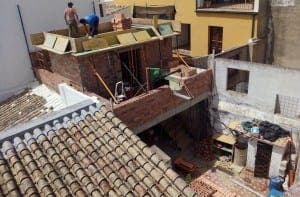 The old boy got a bit ratty about it now and then. One day he collared me in the fish market and gave me a lengthy telling off, little of which I understood. But the lady always waved away my frequent apologies, laughed and said don’t worry.

You couldn’t ask for sweeter people. They look after their little granddaughter most days, while her parents are at work, and it’s nice to hear her laughing and chattering to herself as she plays with her toys in the passage.

The only drawback was, the old couple gave off an overpowering smell of urine. It takes a moment to unlock the gate to my place and while you did that, you’d sometimes have to hold your breath to ward off the smell.

At first I thought it was just me, being hypersensitive. But one day during the construction, Rafa the architect commented on it and all the builders chipped in. The hum at times, they said, was enough to make your eyes water.

This presented an awkward dilemma. I thought of innocently asking if they’d ever noticed a funny smell, but the last thing I wanted to do was embarrass them. More selfishly, I didn’t want to do or say anything to alienate them, especially as they’d been so accommodating.

On the other hand, when someone came to see my beautiful new dream home, I didn’t want the first thing to greet them to be the smell of maturing piss.

The thing is, they really need help, a lot of it. They’re both considerably overweight and they’ve grown more and more immobile, even in the time I’ve known them. She can’t even walk the length of the patio now. But Jerez is in the direst straits and there’s little in the way of home help. Lots of council workers say they’re owed months of back pay. 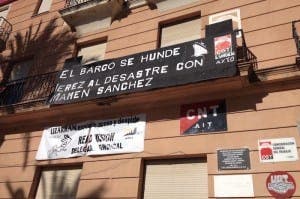 The government has probably scrapped most provisions anyway, same as they have in Britain.

I was talking about it to a couple I know – he’s English, she’s a Jerezana. They said they’d had the same problem with an old man who lived next to them. Eventually they rang social services who came and threw out his mattress and all his furniture, gave him new stuff and deep cleaned the place.

Patri, the Jerezana, offered to call social services for me. But a few days later she told me there was a hitch. There’d been a change in the procedure and they would only come if they received an official complaint from the police. I couldn’t possibly go that far. It sounded to me like checkmate.

But then a stroke of luck. I happen to have got friendly with a policeman here, a really good sort. I was telling him about this one night in the bar and he said, no problem, he could write a report and have a word with the council himself to get something done. All discreet and anonymous. It still felt a little bit shifty and sly, but I couldn’t see another way around it.

I don’t know if there was a visit or not. I can’t ask them because it would arouse their suspicions. But I think there must have been, because the couple’s son and daughter-in-law now come twice a day without fail, to clean the place and help where they can. It’s hard work for them but it’s made a lot of difference. The smell factor has plummeted.

Meanwhile, the old man has been in hospital, maybe even as a result of the council visit. Now he’s back and he sits in his backless hospital bedgown, looking glum. A shame, because he was the more active of the two and now he’s stranded.

A couple of weeks ago I was in my place and I heard the old lady shouting “Patricio! Patricio!” Thinking there was a crisis, I ran to see what she wanted. But the old man had just got to his feet and managed to walk a few steps – for the first time since his return – and they were so pleased, they wanted to show me. Bless them.

Then the other day she shouted for me again, and this time it was trouble. The old boy had gone over backwards in his chair and given his head a nasty bang. He’s a massive big bloke and it took ages to get him back upright, but we did it in the end. She was tearfully grateful for the help.

The poor old stick has to do everything for him – getting him out of bed, back to bed, fed, washed, everything. I don’t know how she manages. I’ve told her, if she needs help again, never to hesitate to ask.

Now that I know them better, I just want them to be all right. The funny thing is, I don’t care any more if they smell of wee wee or not. It’s not the solution I envisaged, but a solution it definitely is.