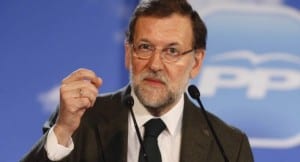 PRIME Minister Mariano Rajoy is prioritising the Catalan issue during his second term in office.

Rajoy, who was sworn in last week after 11 months of political impasse, has put deputy Soraya Saenz de Santamaria in charge of the government’s strategy to fight Catalan independence.

Santamaria this week called vice-president of the Catalan generalitat Oriol Junqueras as Madrid seeks to build bridges with the region.

“The objective of the first Rajoy government in the first legislature was economic, to save Spain from the recession and avoid an EU bailout,” said Santamaria.

“Now it has a more political and territorial objective.”

“My goal will be to try to shorten the distances that separate us and strengthen the bonds that can keep us together.”

She added: “We are going to have to talk a lot in this legislature.”

In recent years, the relationship between Congress and Catalunya has been frosty, with

Spain’s constitutional court suspending the region’s independence roadmap in August.
Madrid had accused Catalunya officials of violating the constitution by allowing a vote on independence.