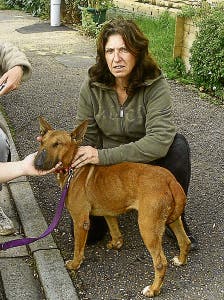 AN embattled animal shelter is the subject of yet another abuse investigation.

Kim’s Animal Rescue is being probed, just 10 weeks after moving to Almeria from Mijas, it can be revealed.

It comes after the new shelter in Gador was denounced by neighbours over claims that up to 100 dogs on its premises were ‘starving’.

Officers from the Guardia Civil’s Seprona animal welfare arm have allowed owner Kim Halliwell to keep around 75 dogs at the site, while an investigation proceeds.

Last night, the Mancunian confirmed the raid and admitted she is still waiting for a licence for the new centre.

She claimed she had to leave her old premises in Mijas – where she still has 25 dogs – after being forced to sell up and demolish the buildings.

“I know the new centre here is not ready,” Halliwell told the Olive Press. “And Seprona have told me I cannot move my remaining dogs because of paperwork issues.”

She added: “I really had no choice. As part of the sale agreement I had to demolish the kennels and so I had nowhere else to take the dogs.

“We are currently in the process of getting a licence.”

Her old centre, which was on the market for €180,000, has been recently sold to northern European buyers.

Halliwell had been forced to sell up after running into financial difficulties, when she was ordered by Mijas Town Hall to repay €20,000 after missing several payments on a loan initially taken out to build kennels.

Critics of the shelter claimed Kim and her daughter Kelly were ‘not capable of running a centre’.

In an Olive Press investigation in 2014, dozens of former volunteers slammed the treatment of animals.

President of Estepona animal shelter Adana Mary Page, 71, told the Olive Press that the latest investigation comes as ‘no surprise’.

“Kim always had problems in Mijas and it looks like she is doing the same thing again in Almeria.”

She added: “She never had the correct licences while she was in Mijas. It gives us all a bad name.”