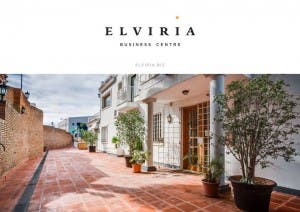 THE doors to Elviria Business Centre are open again after a complete renovation.

Very well located on the outskirts of Marbella, EBC is an Andalucían style five-floor building constructed by a Swedish developer in 1994.

Fully finished offices form part of the recently renovated centre, which has a mixed community of long term residents and holidaymakers including Brits, Irish, Dutch, Scandinavian, German as well as Spanish citizens.

There are several international schools nearby including the English International College and the German School. There are also several large predominantly Scandinavian apartment complexes nearby.

Just a stone’s throw from the Marriott resort, the Don Carlos and other hotels, the EBC is located on the side of the Marbella highway, the N340.