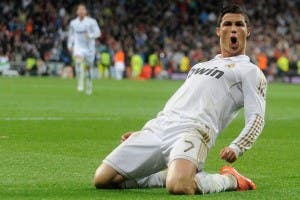 CRISTIANO RONALDO is to become the first billionaire footballer after increasing his yearly salary to €100 million.

The five-year contract with Madrid and a life-long deal with Nike – the first of its kind – will also ensure he becomes the first billionaire footballer.

Nike believes that the player’s global popularity and status as the world’s most followed sports star on social media will bring in unprecedented revenue.

The 31-year-old double FIFA Ballon d’Or winner has also said he will play for Madrid well into his forties, which at €50 million a year would see him net €500 million by the time he is 41.