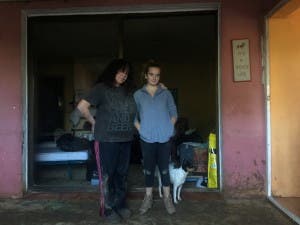 AN expat mother has revealed how she and her daughter were forced to swim out of their kitchen window to survive the worst floods in 27 years.

Adrianne and her daughter Lisa Williamson were forced to paddle to safety when an early morning deluge left them ‘up to their necks’ in water in Fuengirola.

They only escaped thanks to their two dogs, who alerted them when water from a burst river bank began to pour into their bungalow in Calle Membrillo, Albequilla.

They are among hundreds of families who have been left with nothing after the torrential rains of December 3 and 4, which caused the worst floods since 1989.

“It was like being in hell,” Adrianne told the Olive Press.

“If it wasn’t for two of my dogs who jumped on my bed at 5am I fear we could have drowned,”

continued the 54-year-old mother, from Fife, in Scotland. 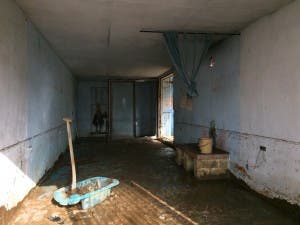 “They woke me up because they were soaking wet.

“I got out of bed to see why and stepped into about one inch of water. At first I thought the roof had leaked but then I realised the whole bungalow was flooding.

“I screamed to Lisa to wake up and within 10 minutes the water was up to our necks.

“It was terrifying and I thought we were going to die. We tried to round up the dogs but then had to get out.

“We tried to leave through the doors but were unable to due to the force of the water coming in from the river.

“So we had to escape through the kitchen window with some of the dogs following us.

“We then had to break down the gate at the front of our house to get to safety.”

Everything Adrianne and Lisa owned was destroyed in the floods.

Even worse, they have had to move back into their waterlogged home as they have nowhere else to go.

“We had to sleep in our house on a bed frame the night after the flood because we had nowhere else to go,” she continued.

“We’ve got absolutely nothing. All our possessions worth money and sentimental items like photographs have gone. 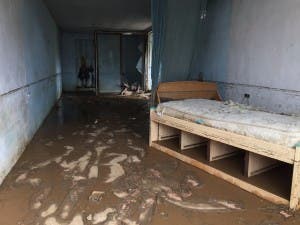 “I didn’t have insurance either, so we can’t claim for anything.

“But we have been since to have been given free accommodation for a week at  CLC Club La Costa World.”

Adrianne praised the work of the volunteers from the Help the Homeless and Flood Victims group.

“They have been working really hard to try get our house back to normal and I don’t know what we would have done without them.

“There are around 50 homes on our street and most of them have been flooded.

“My neighbours say that it has only happened once before in living memory, 70 years ago, but that this time was much worse.”