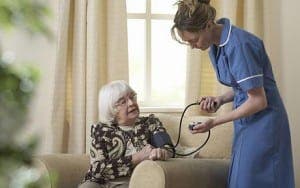 BRITISH expats are flying back to the UK to rake in almost £1,000 per week for looking after the elderly.

An investigation by the Daily Telegraph has revealed how Brits are funding their lives in Spain by taking fortnightly placements taking sole care of the vulnerable.

The carers, the Telegraph said, were also offered free travel and accommodation, are only required to undergo a few days training before they can earn £1,700 in two weeks.

British job agencies are said to search resorts like Benidorm and Malaga for new recruits.

Experts have the said the probe proves there is a “massive crisis” in care of the elderly with a high turnover in the sector.

They also said that they feared many pensioners were receiving the most intimate care from virtual strangers.

The agents boasted of a “huge increase” in the number of expats coming from Spain, of whom many reportedly admitted they did not want to do the job but were attracted by the money.

Age UK director Caroline Abrahams was incensed by the revelations, saying it is “yet another symptom of a crisis in social care.”

Many of the recruits were found to not have any professional qualifications or previous experience of care.

It is believed Brits have been driven to the work by a crippling downturn in the Spanish economy, or to supplement business interests such as bars and restaurants.