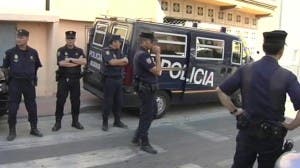 It follows a series of targeted campaigns in the province during 2016 to tackle the issue.

A government spokesman put the increase in arrests down to ‘exceptional work’ although he didn’t explain if this was due to increased police success or if more crimes are being committed.

He also insisted that more aggressive policing was needed on the Costa del Sol, where he said combatting drug trafficking was more problematic.

He said this was due to the existence of a ‘floating population without documentation.’