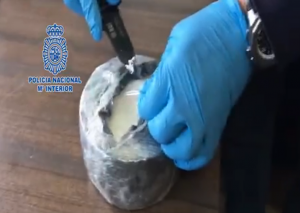 CORDOBA police found an unexpected stink when cutting into a cheese confiscated last Thursday, as they found it to be crammed with a kilogram of cocaine.

The man carrying the cheese was arrested after “behaving suspiciously” while passing a police patrol car on the street.

He was carrying what appeared to be a large round cheese wrapped in cellophane, but when the police cut into it they discovered a thinly–disguised stash of cocaine.

Spain has recently been revealed to be the joint–highest consumer of cocaine in Europe, along with Britain.

The policía nacional tweeted a video showing the cheese being cut open, with the message that this was the first time that they had seen cocaine disguised in this way.