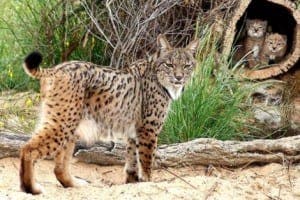 AN ENDANGERED big cat is making a comeback in Spain.

A total of 440 Iberian lynxes are thought to have been living in the country in 2016, up from 404 the previous year.

The good news was revealed by Andalucia’s Junta, which is co-ordinating a national re-introduction programme.

It said the biggest concentration can now be found in the Montes de Toledo in Castilla La Mancha.

Numbers have also increased in the Andalusian zones of Guarrizas in Jaen and  Guadalmellato in Cordoba.

Programme co-ordinators hope that figures will increase further this year when 40 lynxes will be released across five provinces.

Lynxes have been struggling to survive on their own due to a disease that is wiping out rabbits, their primary food source.