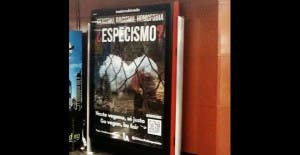 A GROUNDBREAKING vegan poster campaign at a Spanish railway station is stopping carnivores in their tracks.

One sobering image features a lamb incarcerated behind bars, with the phrases ‘go vegan, be fair’.

Union Antiespecista has taken over a publicity board in Madrid’s Puerta del Sol train station, where it has been installing different thought-provoking images.

The first campaign of its kind in Spain, the union’s aim is to encourage more people to stop eating and wearing animal products, which it believes equates to animal cruelty.

According to the last official study in 2011, only 1.5% of Spain’s population consider themselves to be broadly vegetarian, with just 30-40% of these calling themselves vegan.

Anthony Piovesan - 1 Dec, 2022 @ 14:15
Emergency crews are still searching for a hiker who has been missing in bushland on Mallorca for five days. The hiker, a Spanish national and...