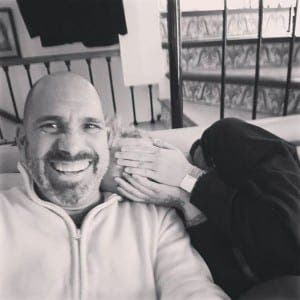 My Goddaughter flew over from the UK to visit this Christmas.

I suspect that several jaws have already dropped open at the thought of yours truly being a Godfather – the respected adult figure whose role is to guide the aforementioned impressionable child in the ways of spiritual matters and righteousness.

I will have to admit that with a CV like mine, Godfather does seem an unlikely role for me but I can only assume that Ozzy Osbourne was busy biting the heads of bats that day, and so at some point in the early 90s the parents chose me.

Said Goddaughter is the brilliant, brainy and beautiful Ziggy, who is now ridiculously grown up and works a a freelance alternative circus performer.

This doesn’t mean that she cracks a whip a lions (and absolute no-no) or gets shot out of a cannon (though several publishers have wished the same on me).

Ziggy performs with, among other things, hoops and fire at most of the major festivals in the UK – including on stage a Glastonbury, Bestival and Boomtown, as well as around Europe.

With bright pink hair, piercings and far too many tattoos to count, she is the perfect Goddaughter to my unorthodox style of God parenting. Think Marlo Brando in ‘Bringing up Baby’ and you have the general idea.

The trip was wonderful and so much fun that she decided to extend her trip by an extra two weeks.

We did the Andalucian culture tour with trips to Ronda and Cordoba, caught a couple of movies, ate far too many pizzas and went to some great live music nights.

Ziggy got on with my friends immediately, and went clubbing with them on New Year’s Eve. (I don’t do NYE. It’s the night for amateurs and I used to be a professional party animal, trust me)

Like the dutiful Godfather that I am, I told Ziggy that she could call me at any time in the evening to come and collect her (taxis are like trying to get the last chopper out of Saigon in New Year’s Eve).

I kept my phone on, snuggled down on the sofa and waited.

At 11am on New Year’s Day my mobile rang.

The little party animal was ready to come home please, and like the waifs and strays rescue service that I am, I sprang into action with a litre bottle of water and a warm jacket.

Needless to say I spent the next two days bringing her reviving cups of tea and flipping on the next Harry Potter DVD as she recovered.

She watched the whole series. In reverse.

I have never been a prouder padrino!