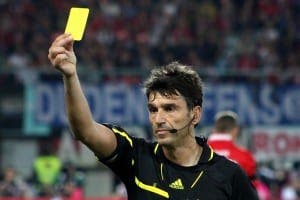 FOOTBALL referees in Andalucia have revealed they fear being assaulted by fans or players while at work.

A Facebook page has been set up by an informal union of referees to document the violence they suffer on the pitch.

Juan Antonio Alvarez, a referee from Cadiz, said many are ‘afraid’ of refereeing matches in which they may be injured by players or fans.

A state commission set up to investigate abuse and intolerance in sport reported 115 attacks on referees over the 2015-2016 season.