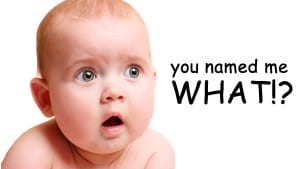 AS Gaylord Focker and A Boy Named Sue both knew, it’s bad enough living with an embarrassing name.

But there’s worse news for anyone called Dick, Herbert or Wally – you could grow up to become the spitting image of your name.

Insane though it may sound, a new scientific study suggests that people seem to grow into the stereotypical features associated with their name through some form of self-fulfilling prophecy.

In tests, people guessed the names of complete strangers from a choice of five with an extraordinarily high degree of accuracy, just from photographs of their faces.

I’m not so sure. I know a lot of chaps called Jesus and none of them have long flowing hair and stigmata. And if we can become the incarnation of our first names, why not our last names too … although I’ve come across tall Mr Shorts and small Mrs Larges.

But if there is anything in it at all, I’m glad people stopped calling me ‘Bucket’ before I grew a handle.

It’s strange but true that names are subjective.

It’s even been proven scientifically (in America) that a Katherine is perceived to be more serious and studious than a Bonnie, a Scott more popular than a Herman and a Mary to be more moral than a Mandy, while a Bob is expected to have a rounder, jollier face than a Tim, because of the shape of the letters in the names.

In my youth, all cleaning ladies over a certain age seemed to be called Lil or Vi while handymen invariably answered to the name of Bert – good, solid working class names popular in the pre-WW1 era. Those among this year’s batch of babies destined to wield mops and power tools are more likely to be called Sophia or Lucas, two currently fashionable girl’s and boy’s names.

‘Posh’ names, to my stereotypical way of thinking, probably because the only Sophia I know of was the Queen of Spain.

As for the less popular Bob, he’s unlikely to be your uncle in tomorrow’s world.

Fashions in names appears to rotate in 50 year cycles.

It’s probably why the Royal Family are careful when choosing names for the heirs to the throne, favouring good, solid monikers like Anne and Charles.

The present-day populace would never have the same regard for a monarch called Queen Sharon or King Darren.

Of course, because of their association, some names will never come back into fashion.

You don’t come across many little Herods, Jezebels or Adolfs these days.

Conversely, Harry (as in Potter or Prince) and Emma (as in actresses Watson or Stone) are very much in vogue in a way that Donald and Theresa may not be, at least for the next half century.

But now the same scientists who conducted the aforementioned study are asking another question: if a name can affect physical appearance, why not other attributes like personality and skills?

It’s all psychobabble to me but future parents might be advised to throw away their Penguin Book of Baby Names and consult Forbes Rich List.