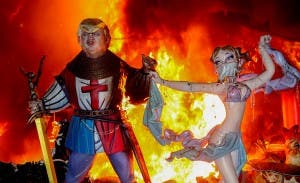 EFFIGIES of Donald Trump went up in flames at the finale of the Las Fallas festival in Valencia in March.

Months of painstaking work go into constructing the giant ‘ninots’ out of wood, plaster and papier mâché before they are burned to the ground at the festival’s fiery finish.

The yearly tradition marks the change of seasons with a five-day fiesta commemorating Saint Joseph, the patron saint of carpenters.

Hundreds of sculptures are scattered across the city for the public to view before they vote to elect their favourites.

They are then saved from the bonfire to join a select number of ninots at the local Fallas Museum.

Unfortunately for Trump, he wasn’t looked too favourably upon.
The statues usually parody Spanish politicians, celebrities and local stories but often extend to global personalities.