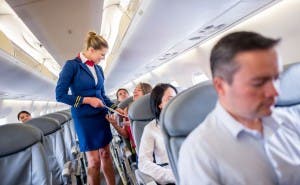 FLIGHT attendants have revealed the sinister reason they may sometimes appear super-attentive during your flight.

While you may be appreciative of the good service, it turns out extra-friendly cabin crew may just be looking for an excuse to fart.

The crew, who spend most of their time with colleagues in the tiny galley area, will avoid passing wind among their fellow workers, instead opting to release it as they walk down the aisles.

Speaking on Q&A website Quora, airline history student Ross McDonagh explained he had read many books by flight attendants who refer to the practice – known in the industry as ‘crop dusting’.

One flight attendant wrote on her blog: “It happens every time… I come home from flying my trips 5-7lbs heavier….

“Why, you ask? Not because I ate up the whole world, but because of water and gas retention. It’s something that affects EVERY flier.

“For me, as a flight attendant, the effects are right away. When I strap into my jump seat, which we have to adjust so that the belts are tight…it’s to my fit.

“When it’s time to land, I have to let the belts out a bit , because I have expanded (because of the gas in my body, that we all have in our bodies.)

“The longer you’re in the air, the more you expand. Now couple that with retaining water, you have the dreaded BLOAT!”

Cabin crew regularly complain about the excess bloat and gas they suffer from as a part of their job.

So the next time you call on a cabin crew during your flight, just know they could be using it as an opportunity to float an air biscuit.

Cancellations and delays: How Spain’s Ryanair strike is affecting passengers on Tuesday